Let me come clean and admit to you, I am not the biggest fan of deathcore. Having said that, I have listened to the few good ones that have been around since the mid-2000s. So I had hopes, and went into listening to Necrotted, a German band’s latest release with an open mind and open heart. Having never heard of them before, I was pleasantly surprised.

But before I analyse the album, let me just talk you through what I know and think about deathcore as a genre and the bands involved with it.

Deathcore, when done well, really takes the energy from hardcore and makes you want to have a 1-man mosh in your room. Good deathcore makes you want to smash stuff. But in recent times, I’ve found good deathcore hard to come by, with most of the bands taking a CHUGGY-CHUGGY-CHUG-CHUG approach to creating their music. Then came Thy Art Is Murder in 2015 and 2017 and Fit For An Autopsy‘s The Great Collapse this year. So 2017 could possibly be the year deathcore re-evolves. And the evolution is one of less crab-walks, less chuggy-chug djent-influences and closer alignment with death metal but with a distinct energy from hardcore.

So where does Necrotted stand with their release?

They are getting there, and I do hear similarities to the stellar Thy Art Is Murder. There is definitely no chuggy-chugs, but real intensity. The album starts a bit slow, and a tad simplistic (don’t crucify me guys, I’d not be able to put out even a riff for snails), but really picks up from the 3rd track Hunt Down The Crown which caught me by surprise. The pace, intensity and creativeness really excels in this.

Particular mention should go to their drummer, Markus Braun. He’s an absolute beast behind the kit, and his pedal work is quite understated, but supported with good mastering of the tracks. The guitars also lay down some head-hurting riffs, and the lead guitar work really stand out. Another great track is the 6th, My Foray, Your Decay. Similar in vein to the one above, but again with more experimentation and inventiveness.

One trend that I realised with this album was that when the band just tried to do something different, gave creative freedom to their lead guitarist and their drummer, they create really great songs or parts. These bits are all over the album, but perhaps need to become more concentrated.

And if the band ever reads this, may I offer just one more opinion, many top bands (in deathcore or otherwise) tend to get into one large concept (e.g. racism, environmentalism, or even philosophy) that is really close to their heart, and really drive across the message with their music. I feel that this drives the creative aspects further, and something I’ve seen emerging in the standout deathcore, hardcore, and death metal bands.

Worldwide Warfare sees a 9-year old band on the verge of puberty, on the verge of being a force to reckon with in the years to come. But for what it’s worth, this is a really strong effort. And I did mosh, maybe more mentally, and headbang, in my chair.

Standout tracks: Hunt Down The Crown, My Foray, Your Decay, and Vile Vermin.

Check them out at: https://www.facebook.com/NECROTTED/
Get the album at: https://risingnemesisrecords.bandcamp.com/album/worldwide-warfare 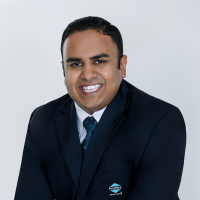